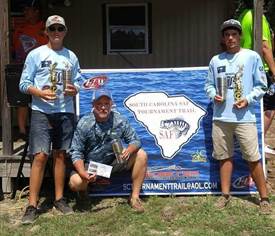 Coming in second, were Raymie Segars and Jack Covington representing Wilson Hall with 8 pounds.  Taking third place and also Big Fish honors was the team of Johnny Koester and Reid Shaw from Berkeley High School with one lunker weighing 6.13 pounds.

Thank you also to Chris Veronee, Chris Gramling and the entire Gilbert Bass Anglers for hosting the Lake Murray Tournament, including the cookout. Also, Tim Harmon & Treeshaker Tackle for the special guest and pro fisherman, Brett Pruett, who gave the morning prayer and motivational speech before blast off. Thanks also to Alex Dziengielewski & ALX Rod’s for sponsoring the SC SAF Tournament Trail and helping with the weigh-in.

Next SC SAF Tournament trail stop will be on Lake Hartwell in September.  For more information visit www.sctournamenttrail.com.