Dan McNaulty, remember that name…. because he was one of several driving forces behind the winners of the 2014 High School Fishing World Finals.

Two more names you will want to remember for years to come, Brandon Branch and Hunter McPherson. You will hear these names in the fishing world again, bank on it.

The 2014 High School Fishing World Finals is in the record books and has proven again that good fishermen are simply good fishermen, no matter what lake, no matter what state they are fishing in, the cream always rises to the top. That was the case again in Russellville, Arkansas on Lake Dardanelle when 21 world championship contending teams from across the nation brought their bags of fish to the final weigh in today.

No home field advantage here, a young Florida team from Eagle High School that has been fishing together for a couple of years now and are the current Florida High School State Champions attended the World Championship this year for the second year in a row. Having fished the world finals in 2013 and made the final cut last year finishing 14th overall, it left them hungry to come back and thirsty for the title of “World Champions.”

Enter the team of Brandon Branch and Hunter McPherson, two very polite, well-mannered young men who brought in 5 fish today in the final round that weighed 16-08 to win the world championship in front of a record crowd and their family and friends and Dan McNaulty who all made the trip from Florida with them. 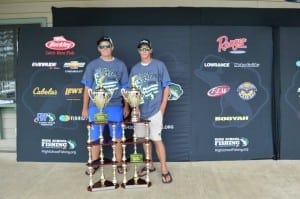 “We found these fish in practice on one stretch of bank but it was not the bank we planned to fish. Actually we found some nice 4 pounders way up the river in practice we thought we were “on them.”  We ran way up there the first day and they had stopped pulling water, there was no current and no bites to be had, so we scrambled to our back up places.” The boys said talking over each other in their excitement, “We fished this same place every day and every day it was just 2 pounders no big fish but it was enough to keep us in it for the first three days. Then today the big fish moved in and we caught them all on a jig. Dan was looking out for us and we want to dedicate the win to him.”

Dan McNaulty, an angler and a friend of the family passed away in Florida as the pair was preparing to leave Florida to attend the world finals. In fact they had to miss his funeral to travel to Russellville. As fishermen and anglers ourselves, we all know “That is the way Dan would have wanted it.”   Brandon and Hunter both made it clear this win was dedicated to Dan McNaulty, “He was here with us this week” the boys said through their emotion.

We should all aspire to be like Dan McNaulty, a man who loved to fish and wanted to pass it on so badly that he left all his rods and reels to these two young anglers when he passed, so a part of Dan was with in fact with them in the boat and did help them catch some fish today.

Congratulations World Champs, You are both class acts! For their win each angler received a $4000.000 college Scholarship to their college of choice, each received a 50” inch flat screen TV World Championship Trophies and $500 in Cabela’s Gift Cards!

Finishing in the runner up spot was the team of Tanner Jones and Tanner Tackett from River Valley High School Fishing Team Arkansas, who tested the winners by bringing in 16-03 ounces, in third, was the Texas High School team of Michael Snook and Josh Perrin with 13-13.

In all more than $20,000 in Scholarships and prizes were awarded, such as Cabela’s gift cards for the top 10 teams and electronics  to outfit any dorm room for the top 7 with items such as 50inch TV’s  and Xbox 360’s, Tablets and more!

Started by The Bass Federation (TBF) in 2009 to serve all high school anglers in every state or country who wish to participate, The Student Anglers Federation (SAF) is the founding program for all of high school fishing.  SAF along with our partners in fishing at FLW Outdoors, continues to lead the charge to get more young people involved in fishing through our nationwide joint high school fishing program.  SAF conducts or sanctions more than 100 events each year in every state as well as Canada and has touched more than 10,000 participants so far in 2014. SAF offers something for all skill levels and more than just fishing with free online training courses for all SAF members that are based on based on math, science and language arts and why they are important to fishing.  The Student Angler Federation is proudly sponsored by FLW,  Cabela’s, Ranger Boats, Evinrude Outboards, Chevrolet, Berkley, Fishidy, Motorguide, Lowrance, Lews, Solar Bat, Booyah! and The Bass Federation (TBF)