One hundred and thirty-three high school fishing teams traveled to Lake Dardanelle in Russellville, Ark., this week for the 4th annual High School Fishing World Finals.  This is the pinnacle of Student Angler Federation, (SAF) events, and it’s presented by The Bass Federation, (TBF) and FLW, as well as, their sponsor partners and the host of this event for the fourth year, the City of Russellville.  It was a beautiful day at Lake Dardanelle State Park as student anglers from across the US began competing for those coveted titles. 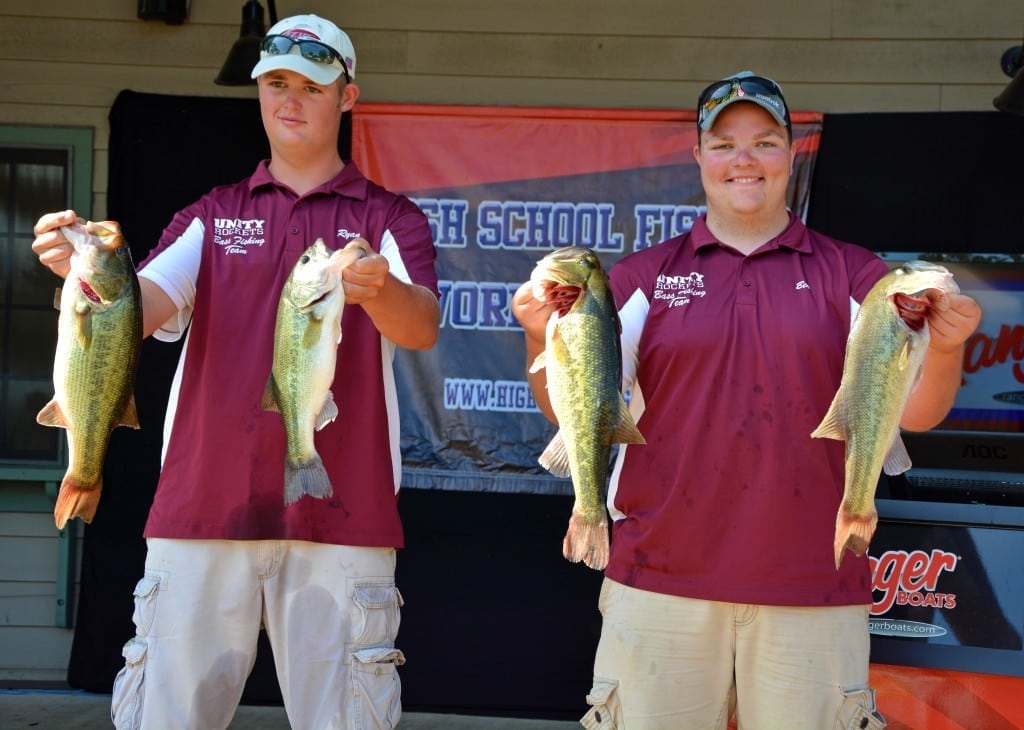 One of the last teams to walk across the stage landed the best bag.  Ryan Spencer and Benjamin Tate, all the way from Illinois, had a five bass limit weighing 20lbs even.  “We got size but not really numbers,” Spencer and Tate, said. “We didn’t reach our limit until 12:30, 1o’clock, then we culled but just a couple times.”

Spencer’s no stranger to TBF youth tournaments, neither is Tate, but this is their first appearance at the world finals and they’ve certainly come out swinging.  “We pre-fished the Saturday before and those are the spots we had today.  Sure hope they hold up; going to try not to switch it up, try to hold on to the pattern.”

Also one of the last teams to weigh-in were local favorites, Baylee Linker and Jake White, a brother, sister team representing Dover High School.  Linker and White had a limit of bass weighing 19lbs 7ounces.  “We’ve got tomorrow going and we haven’t even hit our big spots yet,” the pair said.

“We are from here, out here every day, so we had a bunch of fish located.  We figured we’d go around to our small spots to try and catch fish at each one, then hit our big spots.  But, we loaded up on all our small spots where we didn’t even plan on catching fish.”

The team had a limit by 10am, but didn’t find their lunker until their last cast with five minutes to spare.  “It was the last of the day and it was probably the most 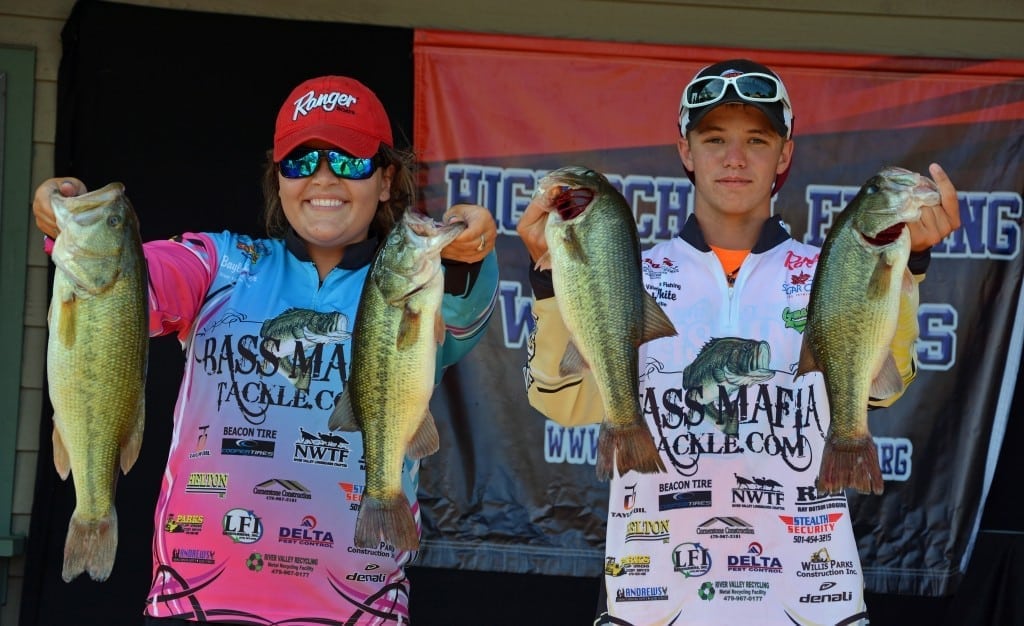 On stage, Linker, who is fishing her fourth and last world finals as a senior, told the crowd this was her brother’s first time to fish it & was glad his first and her last could be together.  “It has been awesome out there with him; it’s been the most fun yet.”

When Linker was a freshman, the brother, sister duo fished the consolation day together where families were invited to fish.  “He made me pinky promise when he could compete I wouldn’t fish with anyone but him.  I don’t break pinky promises.”

Last year, Linker finished in the top ten, but this year with her brother by her side, she’s hoping to take it all.  “It’s our first time to fish this together, it’s my senior year and my last world finals; I’m hoping to get that trophy.”

In a tie for fourth with 17lbs 9ounces are the teams of Trevor Yates and Wyatt Smith from Oklahoma and Austin Dupree and Tyler Woods from Texas.  Dupree and Woods also scored a 7lb beauty that was today’s big bass.  “We found spots in pre-fishing, but we didn’t hammer them too hard,” Dupree and Woods, said.  “We tried to save them, hopefully they’ll replenish strong.” 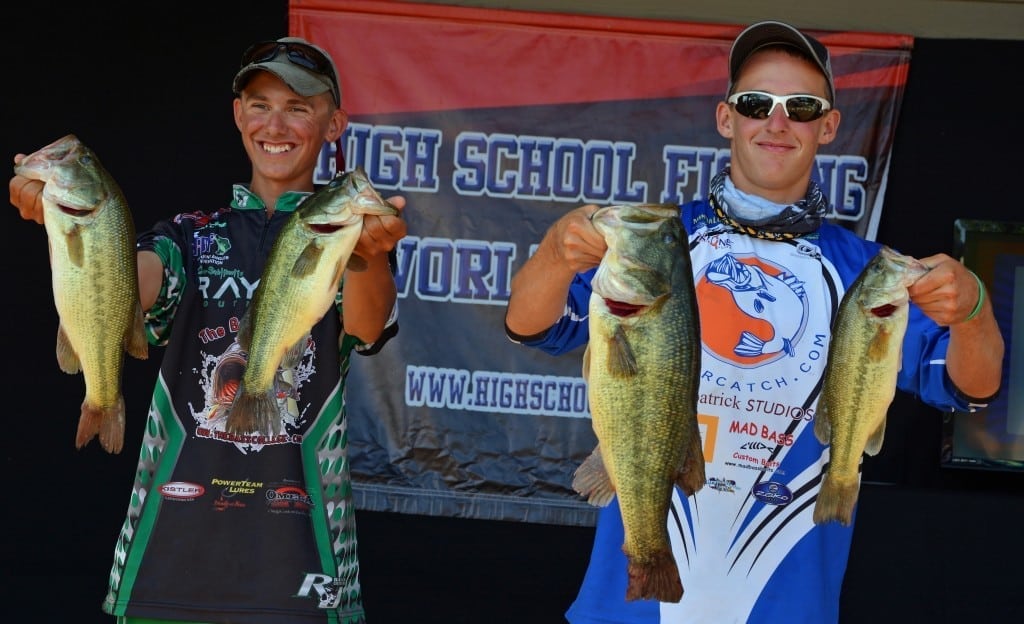 The team had their limit by 10am and their big bass by 10:30am.  “The wind changed directions out there, made it harder, but we grinded through it.”

Tomorrow, the 2013 High School Fishing World Finals will continue on Lake Dardanelle and teams will be putting it all on the line to advance.  This year the format has changed to add an exciting element to the event, level the playing field no matter the state, and introduce a double elimination bracket to give students the chance to fish their ways back into the finals.

After two full-field tournament days the weights will be zeroed and the top two teams from each state will advance to the semi-finals on Friday.  The remainder of the field will also fish Friday for a second chance into the finals.  The top ten teams from the Semi-Finals will automatically advance on Saturday.  Then, the top ten teams overall, either from the Semi-Finals or the second chance round will advance.

Weigh-ins begin at 2:30pm CT, and are live streamed daily on www.highschoolfishing.org and www.bassfederation.com.