Top 7 Finalists Advance – Rest to Fish in Unique Consolation Round 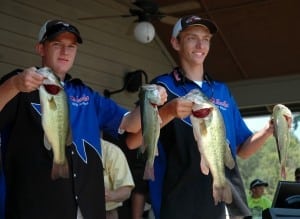 Russellville, AR – Consistent weather conditions this week left some high school anglers scratching their heads after day one of the second annual High School Fishing World Finals on Lake Dardanelle in sunny Russellville, Arkansas today.  With air and water temperatures camping in the 90’s, most anglers planned on a combination of shallow and deep water techniques to catch a limit of bass.  Several teams reported productive practice days; however, many didn’t get the key bites they were relying on today.   A few local teams shined, as well as, reigning champions, Kyle Raymer and Ethan Snyder who have kept the chance of a repeat alive by finishing in sixth just a few pounds away.  There’s a lot on the line for these high school anglers, the race is tight and the drive strong, tomorrow 7 teams will advance to the final round of the 2011 High School Fishing World Finals on Lake Dardanelle in Russellville, Ark.

Leading the pack is Ben Meyer and Michael Henderson of the Arkansas Apache Anglers.  They seized an early lead today with a limit of bass weighing 14lbs 5ounces.  “It started off pretty tough for me,” Myer said.  “Michael hooked up with our first keeper about 7:30.  Then, it was slow until around 10’clock when I hooked up a 4lb keeper; it was all uphill from there.”   Meyer and Henderson are just up the road representing the Pottsville High School Fishing team in Pottsville, Ark.  “It’s quite of bit of pressure being in the lead and with our hometown right up the road there are a lot of friends around counting on us.”  The home team advantage cliché sure played out for Meyer and Henderson today and they hope it sticks tomorrow.  “We pulled out first today and we’re pretty excited about it; just hoping we can keep it going tomorrow” Meyer said.   “Yeah, it’s going to be tough tomorrow just hope we can go out and catch them,” Henderson said.  “I don’t think we’ll be getting much sleep tonight.”

Meyer and Henderson also attended the inaugural 2010 High School Fishing World Finals but came up short.  “We found a spot the last day of practice last year where we caught 3 keepers in 12 minutes.  We went up there the next day and the water had dried up; we didn’t catch a single fish.”  After a first place finish today, there’s no doubt their ready to prove they’ve got what it takes to be the next world champions.  “To win this it would mean earning a college scholarship, being able to fish in college and advancing our fishing careers.  To win this, it would mean everything to us.” 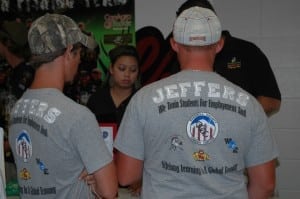 Just three ounces away looking to stop Meyer and Henderson are the Jeffers brothers from South Carolina representing the Barnwell County Career Center.  Cody and Trevor Jeffers caught a five bass limit of 14lb 2ounces today.  “This is our first time on Lake Dardanelle and to come in second after the first day; we are definitely proud and excited about second right now,” Trevor Jeffers commented.  The Jeffers struggled on the water today battling the bite late into the afternoon.  “It was real hard out there; we just digged as hard as we could.”  The Jeffers brothers faced some rough fishing, but trusted in family to push through and came out just ounces away from first.  “Yeah, it’s pretty good having my brother Cody as a partner.  It gets frustrating, but we always get through it.”  The Jeffers father has been in their corners the whole week as the team boat captain.  “Our dad really helps calm us down and keep us motivated.  Like today, he kept encouraging us until we got that big bite; the whole attitude changed from there.” 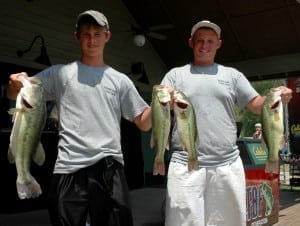 Tomorrow, high school anglers from across the country go head to head to see which seven teams will advance to the finals on Saturday. Friday’s weigh-in begins at 2pm at Lake Dardanelle State Park.  The field will be cut to the top seven teams for Saturday’s final day of competition.  Friday’s activities will be capped off with an angler celebration event for anglers and their families at Hog Wild Family Fun Center with tons of prizes, food, and games.  There will also be a fun one of a kind multi-species consolation tournament held Saturday until noon, as well, as an outdoor showing in the park beginning at 10am with local exhibitors, the Arkansas Game and Fish mobile aquarium, Ranger Boats Simulator ride and fun for the entire family and community.

All events at Dardanelle State Park are free and open to the public. If you can’t make it to the park you can watch the activities online via live stream at highschoolfishing.ihigh.com