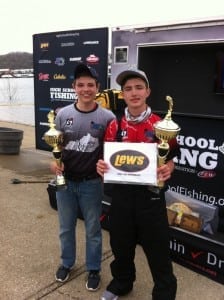 Caleb and Cole Ballinger from Rockcastle County High School outlasted a 130 boat field and morning temperatures in the high 20’s to win the Kentucky SAF State Championship at Conley Bottom Marina on Lake Cumberland. The pair brought in a five fish limit the weighed 16lbs 6oz and it included the day’s biggest bass a 7lb 10oz beauty to advance on to the Southeastern Conference Regional Championship, which will also be held on lake Cumberland in September. The top 13 teams advanced in an event that will pit anglers from 8 surrounding States in an attempt to qualify for next springs High School National Championship

“We caught our fish today slow rolling an Alabama Rig in around 15’ of water,” Caleb, who is a Junior for the Rockets, stated. “We started out trying to fish shallow water and we caught a few fish but they were all small. So, we moved out to deeper water fishing rock bluffs and ledges” Cole, a freshman, added. When asked what the key to their success was they both responded by saying their ability to adapt to the days conditions.

In addition to advancing on the pair also claimed a $10,000 college scholarship to Bryan College in Dayton Tennessee for their winning effort. “What a great event for us to be a part of,” offered Bryan College coach, Michael Keen. “This is a beautiful lake and a very nice marina complex. Combine that with a terrific crowd and it made for a perfect day.”

Narrowly missing the championship spot was the team of Hunter Sumpter and Eli Cook from Southwestern High School who also had a limit that weighed 16lbs 3oz to claim the runner-up spot. Kyler Petrey and Logan Martin from South Laurel High School finished third with15lb 15oz on their limit of bass. They slipped in ahead of James Burton and Don Curtis from Pulaski County High School who  had 13lb 8oz to finish 4th. 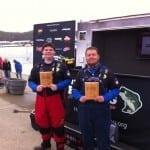 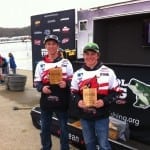 The remainder of the regional qualifiers include Dakota Bishop and Trevor Sweet also from Rockcastle who finished 5th. Matthew Roberts and Richard Cornett from Perry County High School finished in 6th to advance as well.  Jace Hammonds and Elijah Thompson from Burgin High School claimed the number 7 spot and Marcus Davis and his partner Noah Metzeger finished in 8th place.

Rounding out spots 9 through 13 were Morgan and Logan Miracle from Garrard County, Will Blankenship and Brandon Huntzinger from Madison Central, Nathan Marshall and Braxton Lamb from East Jessamine, Jeremy and Jordan Elliott from Corbin and Austin Turner and Lucas Powell from South Laurel High School. 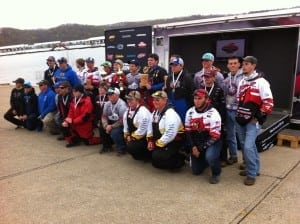 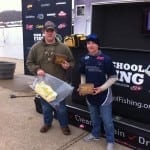 Special thanks to the Shimano Experience team who participated in both registration and the weigh-in festivities and the staff at Conley Bottom Resort who served as host for the anglers for the weekend.